My friend bought this kit several weeks ago. First impression was the kit is very finely moulded, but I had to do a double take upon seeing a pair of plastic dummy wheels with flats. These were intended for the center axle and my reaction was "not on your life". In retrospect, I think Chivers should be credited with providing a method whereby even the greenest novice can produce a working vehicle. Issues with 6wheels are well known and the Dapol Stove R has certainly come in for it's share of stick (see my post about how I fixed mine).

My approach to the underframe (which is my brief, my friend will complete the van) was to use the following:

Crank from a wagon brake fret

The outer axles were fixed and the center axle allowed to slide laterally.

A note on brake yokes. The W iron fret contains these and I did try to fit them. I found though, that the 00 back to back meant that the yoke fouled the wheel rim.

Here are pictures of the finished underframe: 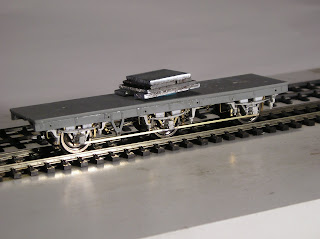 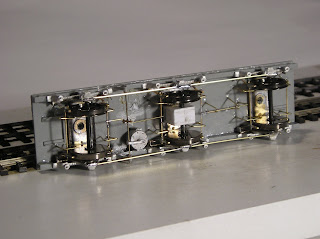 A slight problem was encountered with the center axle being constrained by a safety loop. This was corrected by tweaking one slightly.

The van is complete and I took it round to the club last night. I am delighted to report that it performed superbly. I had it going back and forth through pointwork, even slips and it never faltered.

Here's a picture of the finished article: 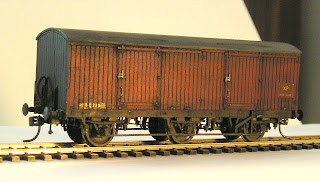 The picture above shows the van in a slightly drunken posture, which I only noticed after the article was published. I found later that paint had fouled the spring mechanism. After cleaning, the van rides properly.
at 1:44 PM