A couple of weeks ago I was at a show with the usual trade stands.  On my travels I came across Bachmann's latest Royal Mail TPO.  Now I had seen this when it first came out several months ago and was tempted then.  It would certainly be nice to have a mail train.  However, my researches and questions turned up that main line mail trains tended to be quite long and included several TPO (sorting) and TSO (stowage) coaches.  The best source I have found is the Wikipedia entry on the Great Train Robbery:  http://en.wikipedia.org/wiki/Great_Train_Robbery_(1963).

The entry says that the loco was a class 40 and that the train was 12 coaches long.  Interestingly, it says that the second coach was a High Value Package vehicle containing money and registered mail.  Unfortunately we are not told what type of vehicle this is.  There was Mk 1 Bullion van developed but this entered service around 1968.  My suspicion is that the Bullion van came about as a result of lessons learned from the robbery.

So, I can't do a main line mail train.  Oher sources indicate that mail trains included GUV and BGs.  The last coach in the train was a brake second (BSK).

My compromise therefore is to do a feeder mail train if you will and mine will be made up as follows:

Only the one coach but I had to show both sides - beautifully done!

1)  Install working gangways.
2)  Install hook and loop couplings along with vacuum/steam pipe
3)  Weather the TPO.
4)  The maroon BG is an ex LMS vehicle and is quite an old model.  This will need considerable work.  The underframe will have to brought up to standard and the windows flush glazed.

I decided to begin with this coach since it requires the most work.  Now, the purist would say that the underframe should be redone completely, similar to what I did with the Mk 1 Suburbans.  I thought I'd try a bit of a shortcut approach here.

Here's the underframe and the bits I plan to use: 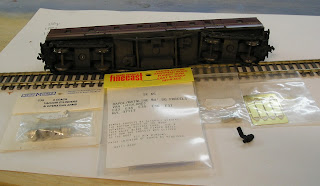 Comet Models to the rescue again for vacuum cylinders and V hangers.  Voltage regulators as well.  I have a set of Finecast flush glazing.  The dynamo is from a batch of old PC coaches that I stripped down for parts.

As for where everything goes...Comet is a useful resource here as well since their site has downloads of photos of completed models and instruction sheets.

First I removed the underframe and trimmed the unwanted mouldings.  I got rid of the old vacuum cylinders and voltage regulators.  I marked out where everything should go.  The original U/F didn't even have a dynamo.

Next, I added struts to the transverse trusses using 0.040x0.040" plastic strip. 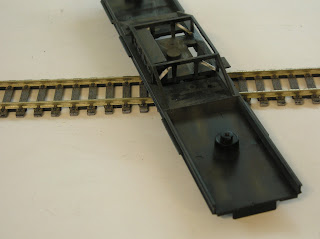 This does look way too heavy and should really be in brass strip.

I folded up the V hangers and threaded a wire onto which I put the brake actuator and crank.  (The crank is from a Mainly Trains goods wagon brake gear fret).

You will see I put a scallop in the base of V hanger - this is so the cylinder will sit in the right place.  A soldering tip:  cut the wire too long and solder from the outside.  That way excess solder will be on the waste. 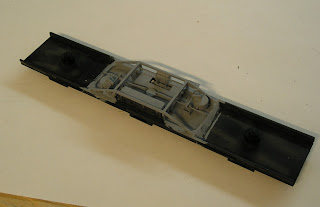 I discovered when fitting the brake cylinder assembly that the original floor was too low so I removed and replaced with a new one using 0.040" plastic card.  A very useful resource for information on these is Historic Carriage Drawings by Jenkinson.  The book has detailed underframe drawings.  One thing that surprised me is that there is no dynamo shown on the 54' U/F drawing and indeed, I couldn't find a place where it would fit.   Also to be noted is that, as this is a brake vehicle, there is a link from the center of the coach to the brake cylinders.  This would permit the guard to control the train brakes.

I was reminded that Mk 1 and LMS coaches had steps at opposing ends of the coach.  These are modelled on the new Hornby Stanier coaches but not on Bachmann.  I made some steps from 2mm wide brass waste and strip: 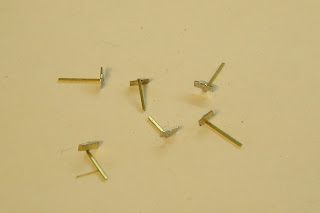 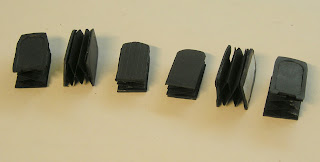 Their construction is discussed elsewhere.  LMS ones are in the middle.  I did have the foresight to go to the art shop to get a couple of quite large sheets of black paper.

I was busy today finishing up the couplings etc. 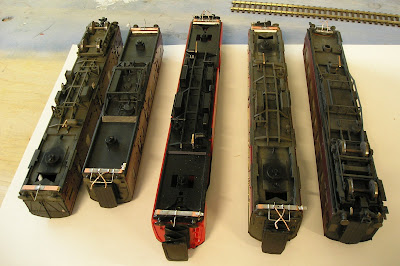 From left to right; GUV, ex LMS BG, TPO, Mk 1 BG and ex LMS BSK.  Note all coaches have a representation of dynamo belt.  I used 1mm phosphor bronze strip for this.  Using the bogie as a guide I drilled a hole in the U/F so that the belt anchor wouldn't foul.  Wrap the strip around the drive wheel and bend it down (towards the U/F) to form the anchor.  Super glue the belt to the anchor point and pulley.

Also to be noted are steps near the buffer beams of all but the GUV.

I had to do some fettling of bogies and PCB to get bogies to swivel freely and bogies were installed today.  Here are some pictures:

I'm quite pleased with how these look.  The vac/steam pipes look pretty effective.  The biggest issue I found (this is the first time the rake has been coupled) is that the gangways between the TPO and second BG are tight.  I suspect the hook needs to be repositioned.﻿

I hope to give the rake a test on Sunday.