I started to build my Conflat L today.  It's another Bill Bedford kit and details can be found here:  http://www.mousa.biz/fourmm/wagons/br_wagons4.html

Mine is intended to be used as a runner for my Class 03 diesel shunter.  These locomotives needed something to trip track circutry that indicated there was a train on the line.  The 03 has a short wheelbase and it was found, in some regions, that it could "disappear".  Permanently attaching a wagon was a way around the problem.  Conflat A wagons were also used, but models of these are common and I wanted something different.

Pictures of these can be found here:  http://paulbartlett.zenfolio.com/conflatl/h1bf074b0#h1bf074b0

The first step in the model build is the sides.  The picture shows one I did earlier and the parts required to build up the side. 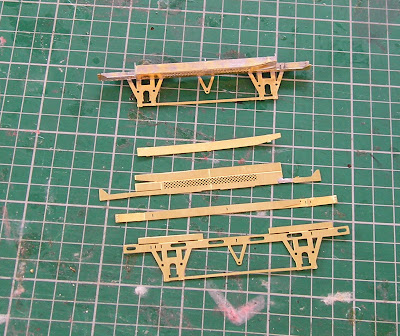 I'm glad I did these one at a time because there is a learning curve and I messed things first time around.  The great thing about brass is that mistakes can usually be corrected by desoldering and trying again - so it was here.

My first note is that on the piece 3rd from the bottom, there is a half etch that doesn't apparently do anything.  The half etch make that location extremely weak and, yes, I broke it on my first attempt.  You will see that I have reinforced it with some solder.

The solebar is made up of the first and pieces from the bottom.  The first piece is actually pictured with the front facing down.  The rectangular sections are half etched and will fold toward the viewer later.

Tin the second part and position on the first part.  Flux and apply the iron starting from the center and working out holding the piece down with a small screwdriver ﻿as you go.  Repeat for the other end.

Use a fiberglass pencil to clean up the work as you go.  This works well to remove excess solder.

On the third part, make a bend with the half etch to the inside (this is a convention in brass kits and will always be so unless otherwise specified).  To get a straight bend I used a largish file to hold one half of the part down while using, initially a chisel Xacto blad and later a steel rule to complete the bend.  Tweak it with some square head pliers.  There are tools to do this so shop around.

There's a short piece on the left that folds up about 30 degrees - solder this in place.

Tin the back of the 4th piece and place on the box you just made.  The location should be evident.  Sweat it in place as was done before.

Piece 3 has tabs which locate at the bottom of the solebar.  These should be soldered in place at this time.

Fold the top pieces of the solebar inwards and reinforce with solder.

There are 3 reinforcing pieces with holes in them (not shown in the picture).  These are soldered at the ends and one in the middle.  The instructions are clear on this.

I completed the other side yesterday - much easier when you know what you're doing.  Today, I tackled the spring snubbers as follows:

1) Take down the etch tag by gripping the (oh so tiny!) piece in flat headed pliers and filing off with fine file.
2) Make the end bends first. Reinforce with solder.  Then using a piece of waste fret (about the right thickness I found) as a form, push down on both legs trying to exert even pressure. With the bent piece balanced on the edge of the fret, finish the bend with needly nose pliers. I found, with a bit of practice that I could make a reasonably square looking "hat".
3) Take off a really tiny (not more than 0.010" thick) piece of solder. Lay the hat on the bench and flux it. Hold down with a small screwdriver, pick up the solder with your iron and apply to the hat. With a bit of luck, the bends will now be reinforced.
4) Lay the solebar flat on the workbench. Put the hat in the center of the W iron (if it won't go, open the base of the W iron slightly until it does). Put a tiny amount of solder where the snubber will go (as in 3)). Position the snubber, flux, hold with screwdriver (about now I'm hoping to evolve a third hand) and apply the iron.

The final step on the sides was brake ratchets.  These consist of a a strip of brass, folded at stratgeic places.  I found it useful to make about half of the folds and then reinforce these with solder, and then to complete the shape.  These are finally soldered in place.  As usual, they are a fiddle but I seem to be getting better at this. 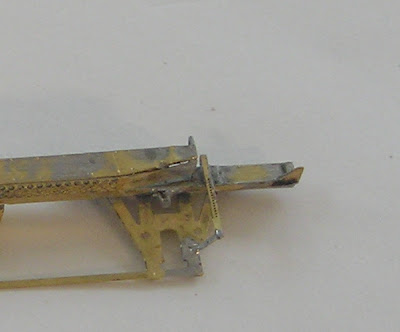 That is one cruel closeup.

The next phase is to assemble the deck. 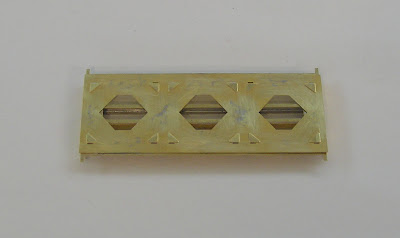 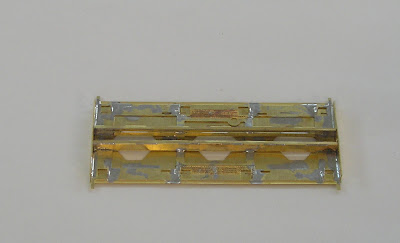 ﻿
Bottom View.
This is all pretty straightforward.  The beams in the center fold up and are soldered in place as shown.  Make sure they are straight.  If I was to do again I would start the solder at the middle and finish at the ends.
There are spring retainers which fold up and get reinforced with solder.
There is no positive locator for the top deck - I did this by eye.  I added eight dabs of solder to the underside of the deck, positioned it carefully again (I bodged it the first time)﻿ and sweated it in place.  I then turned it over and did the same from the bottom trying to ensure that deck is lying flat on the frame.

The next step is to fix the sides to the deck.  I found the fit to be tight and did some fettling with a file to get to the point where the sides would sit down DEAD flat against the deck.  When happy, solder it all up. 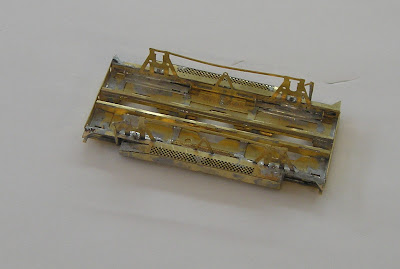 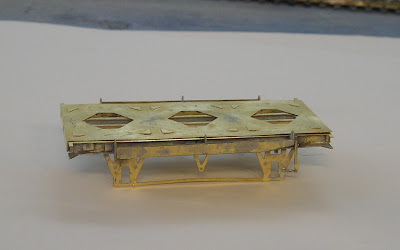 There are 8 spring wire retainers.  Make sure these are in contact with the sides.  If they are not the spring wire will come adrift.

It's certainly not pretty at this stage but it is starting to look like the wagon and it does seem square.

I got the brake gear done today.  This wagon is Automatic Vacuum Brake (AVB) fitted: 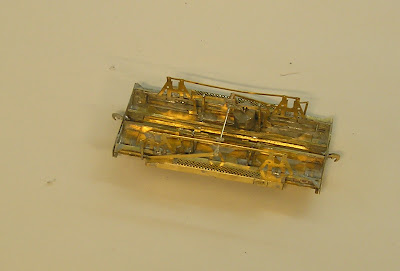 There are brakes on all four wheels that can be actuated either manually or automatically using vacuum power.

The brake assemblies make up in the same way as on the ballast wagon:
The brakes are a double thickness fold up, with brake shoes and crank sandwiched in between.  This, as usual, is a tad fiddly.  First, I tinned the brake shoes.  Then, I put the shoes in between the two halves being careful to position it correctly.  Use a convex file to get the curved profile of the brakes.  Application of the iron causes the solder to flow and for the parts to be bonded.  I positioned the brake assembly, first tinning the underside.  I made sure of the position by threading the supplied wire through all the holes.  Use a broach to open holes that are too small.

For manual actuation, there is a lever on both sides.  For mechanical reasons, one of these has a clutch.  I couldn't work out if there a particular side for the clutch.

For automatic actuation the is a vacuum cylinder which pushes on a rod that actuates the brakes.

The kit supplies two of each lever.  Take one plain and one clutched and bend as indicated in the instructions.  Installed with the handle through the ratchet and the hole over the brake rod.  Solder in place.

The kit includes a casting to represent the vacuum cylinder.  Make sure it is square at the top (mine wasn't).  You will need to drill a hole for the piston rod and use some brass wire.  I chose 0.020".

Strangely, there is no actuator arm, I sourced one from my bits box (a useful thing to have - see post 4 July).  Edit, 7 July - there is one, I missed it.

I turned my attention next to the deck and the container brackets.  These fold up at a 90 degree angle and have a tab which fits in a slot.  Getting these on was no easy task.  I finally found the better way was to:

a) cut a small piece of solder off the roll
b) flux the loctaion on the deck where you want to put the bracket
c) grab the bracket with needle nose pliers and flux it
d) position the bracket on the deck
e) pick up the solder on the iron tip and apply to the bracket.  Check that the bracket is square - it probably won't be.
f) reflux
g) hold the top of the bracket with something flat (I used a small file) and put the iron inside the fold of the bracket while pushing gently with your flat thing.  With good fortune the bracket should seat properly.  Don't push too hard or the bracket will break (I did this twice, luckily there are two spare brakets).
h) clean the excess solder with a combination of fiberglass pen, file and, where you have made a real mess, desolder braid. 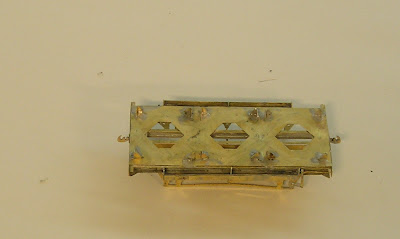 Today I turned my attention to getting the axleboxes and buffers installed.  Axleboxes are a breeze, they fit first time and all they needed was some superglue to secure them.

I had intended to try to spring the buffers, having failed in this for the ballast wagon.  However, when trial fitting on eof the buffer housings in the wagon, the spigot broke off.  That put the kibosh on springing.  I don't seem to have much luck with sprung buffers.  I'm also thinking that the 3D print material might be a little too fragile or perhaps the right word is brittle.  Plastic or metal would be a better choice I think. 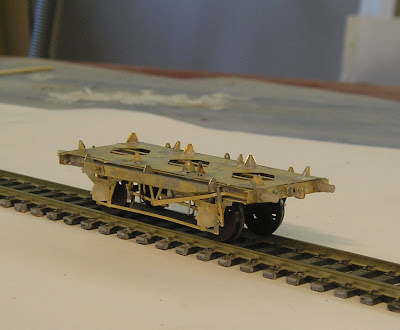 Those wheels are Bachmann.  It runs freely and smoothly.

Fitting of the Kadee coupling is similar in concept to that of the ballast wagon:

After fitting the Kadee mounting pad, but not the coupling, it was off to the paint shop.  A primer coat of red oxide followed by black.  The protruding sides were painted BR bauxite.

The lettering on this wagon is very specialized, so I made my own.  It doesn't exactly match the picture that I used,  http://paulbartlett.zenfolio.com/conflatl/h1bf074b0#h1bf074b0, but it's not bad.

These pictures show the wagon in its' intended role - as a runner for my 03 shunter.  Note the lamps over the buffer beam, one red and one white, denoting staion pilot.

I had to spend some time faffing about getting the springs working freely and getting the wagon to sit square.

This cruel close up shows that I have some work to do on the 03 cab door windows.  I reworked them to be open so that the sound comes out better.

Last weekend I had another go at fixing the windows: 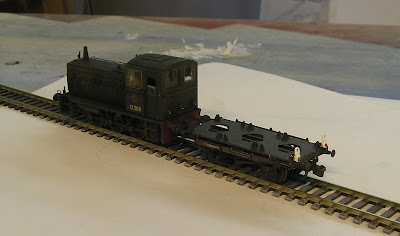