DIFFERENT LOADS FOR WAGONS No 2 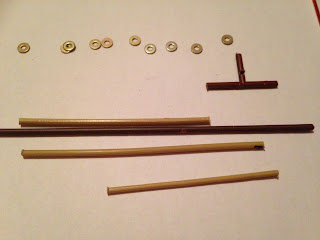 On a rainy weekend afternoon I decided to do some cleanup of the workbench area, in sorting through the piles of bits scattered around I found some old sprues from some previously completed model kits. 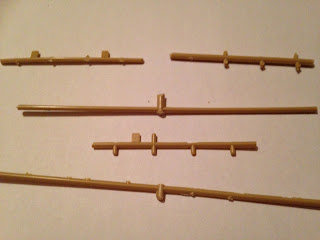 I was ready to chuck them into the bin when I realized what potential they had so I put them to one side with a note about their usage whilst I continued the clean up. Once that was done I picked up the sprues and sorted them into length and shape piles.


Several locations on the piping lengths were selected and the sprues were drilled to accept the brake wheel shafts. These were then glued in place and painted in either red or white which made the finished articles look more interesting 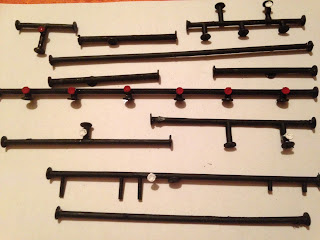 Then I manufactured various shipping fixtures and added chains and strap downs in different combinations. The resultant loads can be used with long wheelbase wagons or if required static loads parked on the layout.
at 7:49 PM