I wanted to give everyone the benefit of some research I did recently about lamps. This came about after a friend of mine took me to task for brake lamps on one of my brake vans.

It turns out that brake vans on main lines were required to carry 3 lamps. One in the center and 2 side lamps. For single track branches and double track mainline, these were red facing the rear. Less strictly, it seems, the side lamps were supposed to show white towards the front so the crew could confirm the train was intact.

This picture shows what I mean (OK, the center lamp lost its jewel when I was mounting it, I'll have to paint it red): 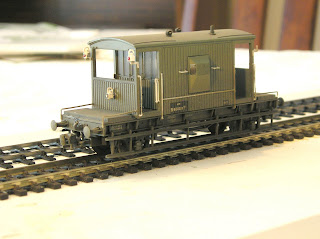 For multiple track main lines, for trains on the slow line, there was supposed to be a white rear facing lamp on the side of the brake nearest the fast line. The position of this white lamp was such that the crew of a train approaching from behind could tell which line the train ahead was on. Trains on the fast line carried 3 red lamps.

For goods or loop lines, one red lamp was required.

Allingham has a double track main line and will have a branch line. So, as near as I can tell brake vans on the layout should have lamps as shown.

The guys at the Solihull Model Railway Circle provided me with the info. I just modified the van.

These have a brake van at the rear, and always have 3 lamps on the running line, regardless of the type. The tail lamp just shows red to the rear, as is obvious. The side lamps show white forwards at all times (on main lines) at both sides (and the driver would look out of these to help him see if the train was complete). The side lamps show red to the rear on main lines, but they were adjustable in that they had a removable red slide. When the train was in a loop, this would be removed to show white to the rear on the side nearest the running line. This indicated to the driver of any train on the main line that the freight train was inside the loop clear. My memory fails me a bit on the case when on the slow lines of a four-track line, but I think if the train was on a running line, 3 reds would continue to be shown; however other accounts don’t mention this.

Some accounts mentioning showing just 2 red lights in some circumstances, but this did not happen in my day.

Side lamps were always to be removed when going into sidings other than recess.

Tail lamps were always painted white; side lamps either black or white.

Fully fitted trains, including parcel trains where no passengers are carried:
Just one tail lamp shown.
The guard would always ride in the rear cab of the locomotive except for nuclear flasks, where the guard rode in a fitted brake (usually piped only) behind the train, with a barrier vehicle between the van and the flask vehicle. Another barrier would be present between the flask vehicle and the loco (these requirements no longer exist, I believe.) No brake vans or barrier vans are required nowadays.

In my day, all showed a separate oil tail lamp, even DMUs, except for HSTs with their own high intensity lamps. This requirement was removed for DMUs, which had their own built in rather dim red lamps.

The rule is quoted here:

7.4.1 Guards of freight trains not fitted throughout with the automatic brake must ensure that in addition to the train tail lamp, two side lamps are carried on the rearmost brakevan. After sunset or during fog or falling snow they must show a white light forward , but the indication to the rear must be as follows:-

The above just refers to the sidelights and the aspect to be shown to the rear.. the main red tail light in the centre of the van would remain illuminated all the time of course...The reason for changing the aspects shown to the rear was to avoid confusing a following train or one passing a freight on a slow line or in a loop. The reason for showing white lights forward was to indicate to the loco crew on an unfitted train that the train was still intact and following.

Thanks to Mark for this information.
at 11:46 AM