This model has received some sharp criticism since its release. As far as I can tell from consulting some LMS coach literature the upperworks are correct. It is in the underframe where trouble starts. The running gear seems to be nothing but compromise. I have read that the coach won't stay on the track, particularly through points. Wheels are undersize (at 12mm dia, should be 14mm) and flanges are grossly deep. Brake shoes are miles away from the wheels. It isn't easy to replace the wheels since the wheel mounts are fairly thick plastic and you would have to grind through the bridge from pivot to W iron quite drastically to give 14mm wheels clearance.

I chose to scrap the wheel mounts and replace them with components from Comet Models. I got the C7 W Iron pack (enough for 3 sets) and C14 Clasp Brakes. I reused the plastic axleboxes but in hindsight I wish I had used the Comet cast ones (C17).

Fitting these wasn't easy but after several tries I managed to get all wheelsets at the same height.

There is a LOT of fragile detail, much of it came to grief as I was working on the coach but I was able to repair using lashings of superglue.

I have run the coach on Allingham and it seems to be OK although I must admit I haven't subjected it to any serious shunting.

This picture shows the coach after weathering: 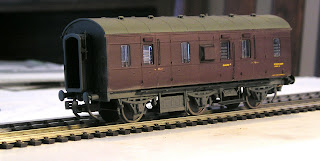 I took the opportunity the other night (while my power was off due to Irene) to visit my friend. I built his layout and he too has the Dapol Stove R. I wanted to see if my all singing and all dancing Stove R would negotiate small (A5ish) finescale pointwork (PECO and handbuilt)so this was an ideal opportunity. I'm happy to report that it passed with flying colours. The same couldn't be said for my friends example however. Despite fitting it with finescale (3 hole disc) 12mm wheels it appeared to rock on the center axle and was not happy going through points.

Said Stove R is now at my house with stern instructions to fix it.

I thought I'd add a picture of the underneath of the Stove R: