Yesterday, I weathered a Class 28 Co-Bo for one of our club members. My friend David Finch wanted to use the new Hattons/Heljan Class 28 Co-Bo “Metrovick” to model a train these locos were most known for hauling, the fast overnight London to Glasgow “Condor”. The train used the Midland route via Leicester, Sheffield, Settle and Carlisle, and was operated from the start in 1959 by pairs of brand new Metrovicks, hauling a rake of roughly 25 Conflat container wagons. David wanted his locomotives to reflect the work-stained appearance of a long-haul freight loco in daily use. I agreed, and suggested also that my weathering job show the engines were still offered a modicum of care and attention as befitted a flagship freight service. 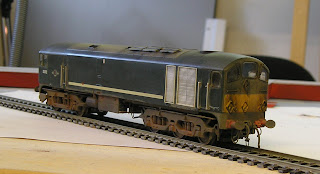 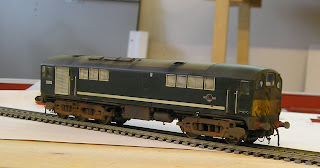 I have a fairly standard method to do this. I use an airbrush and only acrylic paint. I also used weathering powder.

I start by airbrushing some earth on the underframe, lower sides and roof. I follow this with some black, particularly on the roof.

Leave the paint for a few minutes, it dries very quickly.

I then detailed the bogie springs and surrounding area with rust powder. Use a smallish brush, this stuff goes a long way. Use a larger stiff brush to spread the powder around. Then take some umber/earth and lightly apply to the bogies and the lower sides in streaks. Use black powder on the roof. You will see black streaks coming down from the roof detail (dirt washed down from rain).

Finally, as this was a somewhat elite service I imagined that the loco might have had some attention from cleaners. I therefore used Windex (ammonia based window cleaner) and Qtips to wash the sides. You can still see dirt that the cleaners missed.
at 11:23 AM