Our branchline station is called Patchwick. I already described the main station building and platform. This should be a fairly straightforward project - a scratchbuild of the parcels office that goes near the main building.

C&L do a laser cut wood kit of the building (http://www.finescale.org.uk/index.php?option=com_virtuemart&Itemid=55#i), but I thought I could make this from plastic almost as easily.

First order of business was to draw a sketch of the building to scale: 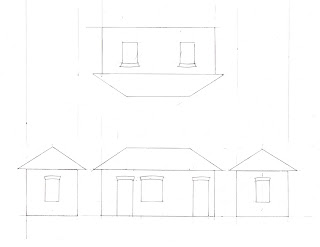 Before starting, I find it a good idea to source the windows and doors. That way the window and door openings can be cut accurately. For something like this, the windows especially are a challenge.

My approach was to start with 0.020" plastic card. I measured the apertures (I had wanted to cut the individual panes but I'm not that good) and cut them out. I first glued two strips of 0.020" x 0.040" as horizontals. When dry, I glued a strip on top for the vertical. I added smaller strips across and on top of the horizontals so they were flush with verticals. These were allowed to dry thoroughly and then the backs were rubbed on a file to remove most of the first horizontal strips. I want the backs to be nearly flat to take the glazing. I also scribed a representation of the window frames.

Again, starting with 0.020" plastic card, I carefully marked out the doors and removed the inset panes. This was a lesson learned from constructing the main building. I can paint the main door chocolate and a separate inside panel cream. When glued together, the inner panes will be crisp. 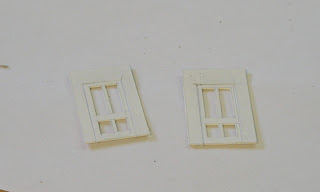 These were laborious, but absent anything commercially available, I think they will serve.

Next, I marked out and cut a sheet of 0.040" plastic card for the door and window openings: 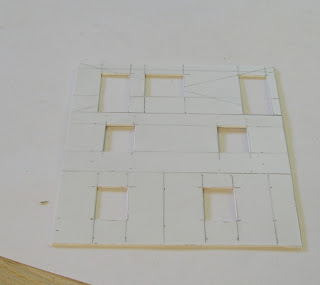 The windows and doors will have to be widened by 0.5mm on either side to allow for the brick detail.

I have painted the windows and doors: 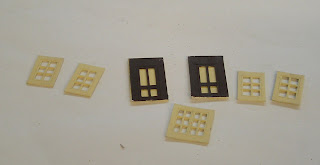 The doors are in 2 layers as I described earlier.

I have glued the brick sheet to the walls. At this stage I haven't cut the openings. Before I do that I glued strips to the sides of the openings: 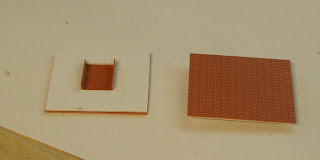 The picture is of the two side walls. The picture on the left is the back of the wall, that on right is the front.

Today, I cut out the door and window openings: 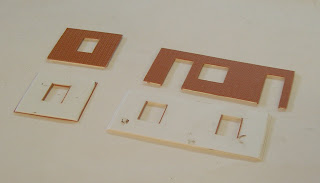 I show the front and abck of the walls. Features to note are the representation of brick in the door and window openings and bevels on the walls.

The walls after priming: 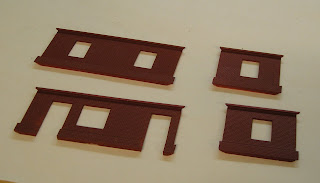 I used automotive red oxide primer. The tin says it is formulated for car plastics and I have used it for along time.

I spent quite some time with the bevels, these need to be very good so that the corners line up.

I painted a coat of acrylic Aged Concrete on the walls this morning. I should have left it about an hour but left it longer.

I used IPA and Qtips to remove the surface paint leaving the concrete colour in the crevices. 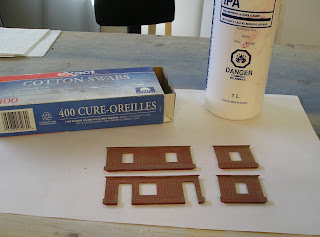 Another thing I learned from Mr. Rice (a very useful chap) is that older walls do not have uniform colour bricks. There are various shades of brown and even black. Yesterday, I went to the art supply store and hasd a look round (I recommend you do this - these places can have very useful things for us modellers). I picked up some fine point coloured pens (light brown, brown and black) and picked out bricks at random to try to represent an older wall. 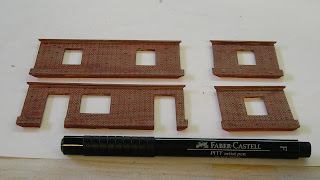 The final things for the walls are a dusting of rust coloured weathering powder and a coat of matte varnish. 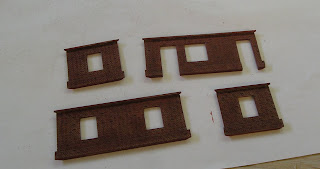 The effect isn't obvious but I think the powder tones everything down and adds yet another layer of shade.

Finally! Some assembly has been done. In these models as with other jobs, preparation takes quite a lot of time. 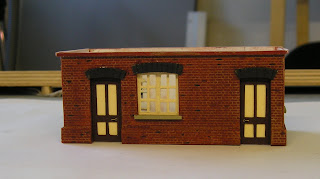 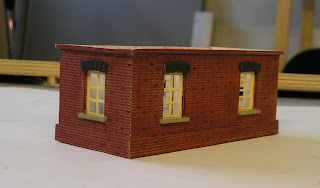 Now, a word about the arches above the windows and doors. I gave this some thought and know from experience that simply trying to scribe and cut these from sheet is trying. My approach came down to the following: 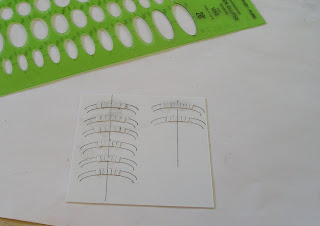 For door handles, I simply bent some 0.020" brass wire and glued into a drilled hole in the door.

After assembly, I sprayed with dullcote to cover up any glue marks.

It's time now to consider the roof. I made some formers from 0.040" plastic card. These are based on the scale drawing I made earlier. I deducted 1mm to allow for the roof thickness. I assembled the roof framework as shown: 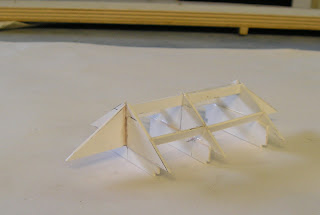 There was some trial and error here and it's not pretty. Hopefully it will serve.

I plan to glue paper tiles left over from the station building. PVA doesn't work well on plastic so I glued some paper to 0.015" plastic card using spray adhesive (not spray mount!). 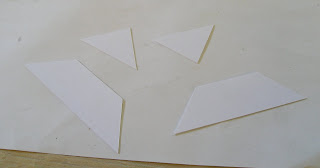 Again, there was trial and error and I have trimmed these slightly.

If desired, you can use Wills roof tile sheet or your own preferred method.

I assembled the roof with the paper coated panels, plastic inside, glued to the structure. Edges were sanded smooth. I also added gutters: 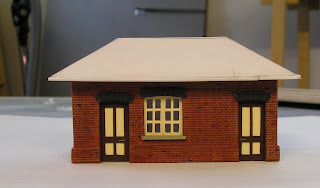 I finished adding the tiles and ridgetiles this morning. 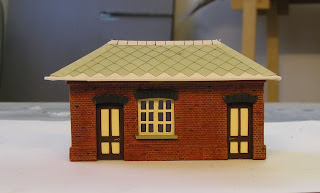 This is a job that takes a bit of time. If you try to do too much, the glue will make a soggy mess. I put some PVA into a mixing jar and used a small flat brush to apply the glue. I put on strips starting from the bottom and alternating the points to give a diamond pattern. Make the strips slightly longer than needed. Lay on two strips each side and leave it for about 15 mins. The glue dries very quickly. Once the long sides are complete and after the glue is dry, trim the strips and sand. Apply the strips to the ends and finally add the ridge tiles.

Yesterday, I installed the glazing. Nothing special here, just try not to get glue on the glass. 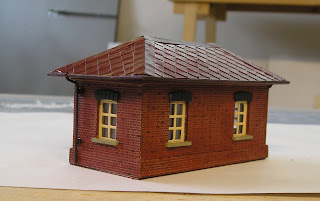 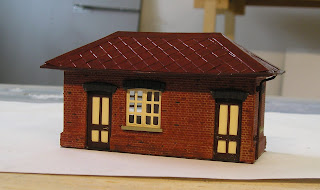 I painted the roof starting with red oxide primer, followed by brick red for the tiles and brown for the gutters.

I then carefully checked the position of the downspouts and drilled holes in the gutters. Start with a 0.020" drill through the underside so that the hole can be centered. Increase the drill size and redrill. Check the hole size with the rod you intend to use. The rod I used is 3/64" - it's a personal choice though.

I used my downspout method detailed in an earlier post. I made 4 small blocks with 0.020" holes drilled at 3/64" apart, using the rod as a jig. 0.040" x .156" strip was used and I find it easier to drill the holes before detaching the block from the strip. It's also a good idea to draw a line across the strip. For some reason, I can't seem to drill two holes in a line freehand. Expect to have some rejects - I did.

Draw a faint pencil line down the wall in line with the gutter holes drilled previously. I marked a point 6mm down from the top of the wall and again 24mm below that. This is not a rule, just what I did. (Although I did read that gutter pipes are 6 ft long, so that is likely where they would be secured.)

Put a small dab of superglue over the points marked and place blocks on them trying to keep them centered. Allow the glue to set thoroughly. When dry, carefully paint them the colour of your choice, I chose brown.

Bend the rod to shape so that the straight section sits flat on the wall and final bend sits comfortably in the hole in the gutter. This may take a bit of practice.

Paint the downspount off the model. I primed with Floquil Zinc Chromate, but I'm not of the availability (There's also a Floquil Grey Primer). This is useful for small jobs. Final colour was brown.

Now, with a 0.020" drill, drill the blocks through the wall. Prepare lengths of 0.020" brass wire bent to shape using the 3/64" rod as a jig. Place the downspout in position and insert the bent wire through the holes. Use superglue to secure from the back. Touch up the bare brass with primer and brown paint.

I prepared an inset, 0.020" deep, in the platform to receive this building. I cut a piece of 0.020" plastic card to shape and glued to the bottom of the building. Buildings need to look as though they are integral with the scene, not just plonked. Touch up the edges.

I also touched up the corners by drybrushing some brick colour.

I will weather the building next.
at 1:29 PM