Dapol recently released the subject coaches, composite and brake. These are done from the Airfix tooling. I bought the kits because I really only wanted the bodies. The price is so reasonable that this is worth it and the other bits will make useful spares.

I previously upgraded the underframe and interior, see the earlier Blog entry on that. I had wanted 2 coaches in BR livery and months ago took 2 LMS liveried coaches for that purpose. Unfortunately the paint removal process left the bodies in very poor state so these products were very welcome to me.

This project will cover: 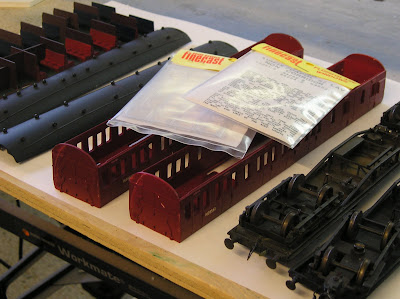 I had hoped that the numbers could be left as is but a bit of research (LMS Coaches by Jenkinson and Essery (OPC)) turned up that they are wrong. The problem is that, for example, the brake number M20562, should be M20562M. The reason? Well, after nationalisation, vehicles inherited from the big four had a letter suffix added to the number, in this case M for Midland. These coaches did continue to be built after nationalisation and those that were BR built only had the M prefix. My transfers are not the same size. My perusal of the book found that 20562 was built in 1930 and 16658 (the compo) was built in 1936.

I have ordered some transfers from Modelmaster so it'll be a week or so before I can get back to this project.

I finally got to return to these coaches after making some buildings for the layout. I ended up using HMRS numbers but had to use Modelmaster "M"s because the sheet I had didn't have any "M"s left. I also used Modelmaster "GUARD" and "Load..." on the BTL. I found that the varnish film on the Modelmaster transfers tends not to adhere to the model, so after the transfer was dry, I carefully removed the varnish layer. When happy, I sprayed the body with Dullcote.

Once the body was dry, I turned my attention to the Finecast windows. These are vacuformed and quite fragile, being easily crushed by clumsy fingers. A toothpick can be used to tease them back into shape if necessary. Before installation, I added Smoking/No Smoking signs to the inside of some windows.

Note: I should have read the directions more closely because there is a subtle taper to the windows so that they sit flush. I didn't do this and ended up installing about half the windows again to get them oriented correctly.

When installed, the windows are a definite improvement to the Airfix/Dapol but probably not quite as good as Shawplan (but then again, Shawplan don't do windows for these coaches). The coaches were reassembled and the result is shown below:

N﻿otice that the couplings are homemade "hook and bar".  I learned the method from Tony Wright in one of his DVDs and they work great.  There's an earlier post in this blog that describes how to make and install these.
at 11:09 AM