There has been a fair bit of discussion about the 4F of late. Most recently Hornby released a warmed over version of the Airfix 4F with loco drive. This is disappointing to me since the body appears to be the same as the Airfix body designed in 1975. I am resolved therefore to upgrade mine (a second time) before Bachmann release theirs.

Several years ago I obtained a Kemilway chassis kit for the loco and tender and this worked very well indeed, even in DCC. My thought was to further improve the model using a Loksound 4.0 sound decoder. How hard can that be? I took the following picture partway through the decoder install:

The Kemilway chassis is a clever design being a fold up etched nickel silver affair. It incorprates sprung compensating beams and straightforward pickup design. Chassis is grounded.

You can see that I have installed an 8 pin socket in the tender with wires intended to pass into the loco.

This next picture shows the speaker and decoder in the tender body, quite a snug fit: 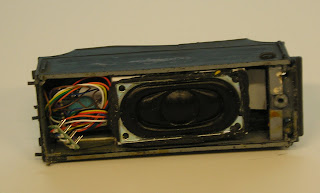 So far so good. Now the problems. First the wires wouldn't go easily between the frames and gearbox but I got them in. Next I wired the motor and pickups and did a test run. Well, it did go...for a few seconds, then a short occurred. I tweaked and retested but the short still appeared. Now, in my experience DCC is much more sensitive to shorts than DC so I thought that my chassis construction was probably to blame. In particular I suspected that the brake shoes might be touching the wheels although I couldn't see anything obvious.

To cut a long story short, I finally resolved to re-do the chassis. This also gives me an excuse to try out my Avonside ChassisPro jig. I tore down the Kemilway chassis (It was starting to look quite ratty anyway) and produced two frames with slots for the bearing hornguides, as shown in the following picture: 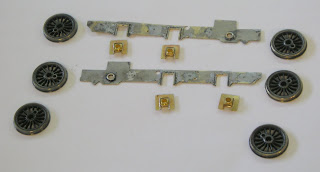 The picture also shows the 5'3" dia. wheels (Markits) which I chemically blackened. These are suitable for code 75 C&L track (I checked). [Aside, I have an older loco with the same dia. Romford (as it was then) wheels. The flanges are a good 1mm larger on dia. than these.] The hornguides and bearings are also shown. These must be a sliding fit such that the bearing will fall out of the hornguide.

I spent some time (no idea how much) assembling the frame sides. I used the ChassisPro to get the bearings located accurately. I must view the DVD again now that I've done a chassis to see where I went wrong. Here are the pictures: 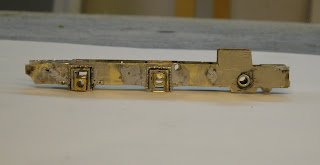 Next, I'll set up the compensating beam.

Here's a view of the compensating beam: 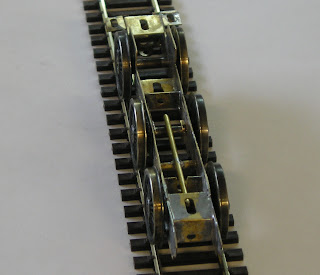 I have tried to make rigid chassis in the past but haven't been able to manage it. Compensation, on the other hand, I find quite manageable.

There's a pair of holes in the frames through which a rod is threaded through a tube. Another rod is soldered to the top of the tube, the ends of which rest on top of the first and second axles. These axles are free to rock and will ride up or down slightly to follow track contours. This helps maintain electric current and improves adhesion.

The next milestone - a free running chassis with coupling rods temporarily installed:

It's critical at this stage that the chassis whizzes, as it did before, down the track without hesitation. You will likely find that in the first go, it does just that (hesitate I mean). Assuming the chassis and axles are square (they'd better be!), it is usually a simple matter of reaming the coupling rod holes SLIGHTLY. Do one pair first, then retry. Working on rod holes progressively until all is well. You'll note I retain the rods with wire insulation for this step. The axle nut covers can be seen - I'll swing these into position later.

It's alive! I installed the motor and connected it all to a power supply: 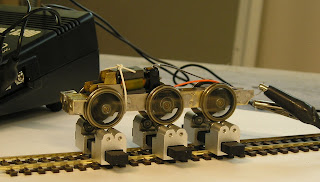 It's running on a Bachrus rolling road.

Having assured myself that all was well, I soldered the coupling rod nuts in place (put a piece of paper between the rod and nut to prevent soldering everything solid). After this, I was a bit concerned because the chassis became somewhat tight. After a few minutes thought I remembered an article I read the other day about making Portescap gearboxes quieter ( http://www.cometmodels.co.uk/ , go to the download tab and scroll down). The method involves WD40 and tooth powder. As I don't have any tooth powder and didn't fancy spraying WD40 into a small tin, I used jewllers rouge (we are after all seeking something akin to a Swiss watch) and mineral oil. I scraped some rouge into an aluminum tart tin and added the oil, stirring with a toothpick. I applied this to the coupling rod joints and, just for giggles, the axle bearings. I then pushed the chassis vigorously along my meter test track for a while. I was pleased and not a little amazed to find that it loosened up markedly. I washed the oil/rouge off with lighter fluid and pushed the chassis around some more. The rouge/oil treatment was repeated and after a while I was able to get the chassis to roll down a small gradient under gravity. I felt that was probably as good a benchmark as anything.

Yesterday, I took a break from the chassis while the epoxy securing the PCB for the wipers cured. I decided to have a look at the body to see if I could remove the splashers and make them more to scale. When I tried to remove the splashers from the footplate it basically disintegrated - probably due to age and my clumsiness. I then had a go at making the footplate out of Evergreen strip. To cut a long story short - close but no cigar. Maybe with further effort it could be made to work. I think Evergreen plastic is a bit too soft for this purpose.

So, in the meantime, I have a second Airfix 4F (I was going to use it to make an EM version but I have since acquired a Finecast body kit)....

A little more progress to report. I did the wipers using a 1/64" rod and 0.45mm Ni Ag wire. I did try to be neat, honest, but it all seems to go ahoo. Anyway they do work. After that, I fitted the brakes. These are plastic from Alan Gibson: 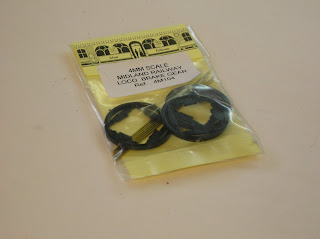 My rationale on this is that there is no risk of a short from these. 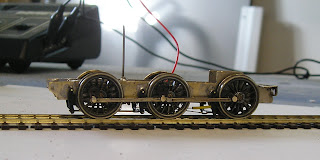 The pickups can be seen as well. I put the yellow insulation on them to ensure that they don't contact the chassis. I should add the chassis is live (wheels on the non-pickup side are uninsulated), meaning that at least one side of the loco has good contact and halving the pickup job.

I spent the last few days working on the body. This is the alternate model of the BR version, which is just as well because that's the version I wnat. The obvious difference is the lack of piston tail rod covers on the buffewr beam.

First, I carefully cut away the splashers. This worked better than I hoped. Once out, the bases were filed so that the height is 5.5mm (1' 5"). This gives a splasher base of 21mm (5'3"). I reckon this is very close to the prototype. When glued back on (happily Airfix plastic is very amenable to styrene cement) the gaps were filled with plastic strip. Chimney and dome are low profile (Brassmasters or Finecast). I fashioned weights for the firebox top and sides and inside the boiler. Still, I'm only at ~ 200 gms.

A fair bit of time was spent thinning the splasher radius and otherwise fettling until the chassis runs freely. I found the RH center splasher to be too short so beefed it up with strip. 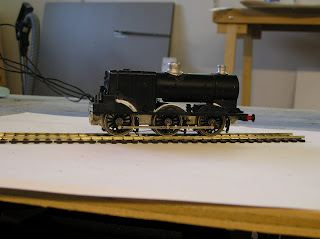 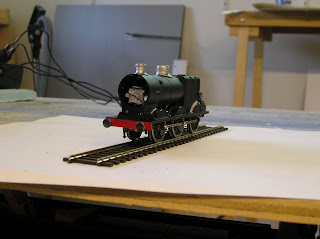 It all looks pretty rough but it is coming along.

I spent the last few days, on and off, working on the body. I have added the handrail and piping along the sides. The left hand piping is brass tube/wire and copper wire, all chemically blackened so that when the paint rubs off it won't show bright.

Here's the body in "works grey": 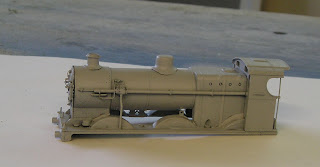 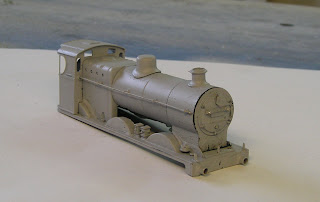 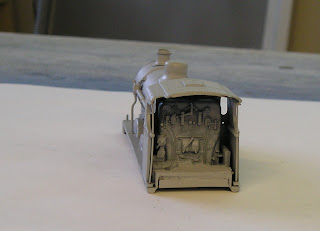 The thing about grey is that it shows the blemishes and I can see several areas that need further work.

This project has been languishing due to other priorities.  You can get an idea of that from more recent posts.

Today, I thought, enough already time to get on with it.  I had painted the chassis black and spent some time installing wheels, oiling and loosening things up.  I decided to do trial fit and see how things ran.  Well, they don't.  There is too much interference between wheels and splasher.  Looks like Airfix had the right idea in the first place.

A few months ago I bought an old Finecast 4F second hand.  When I do this, I never have high hopes, and in this I wasn't disappointed.  It was clear that the castings were from the very early version of the model.  Worse, the chassis is whitemetal and the motor is an X04.  The good news is that the wheels are Romford, although I expect that these will be pre RP25 (this is TBD).  I should be able to turn down the flanges using my Dremel and a file.

The model in it's built form was unacceptable so had to be disassembled.  How to do it?  Well, I didn't even know how it was put together.  Low melt solder is advocated by most modellers, but many people use glue.

I dumped the body and tender into a pot of boiling water.  Low melt solder has a melting point of 70 deg C, so this will melt any solder.  After about a minute, nothing seemed to be happening so I removed the components from the water and dropped them into a bowl of cold water.

It took several minutes but I noticed that the joints were weaker and the more I teased the parts, the looser they became.  Eventually I ended up with this: 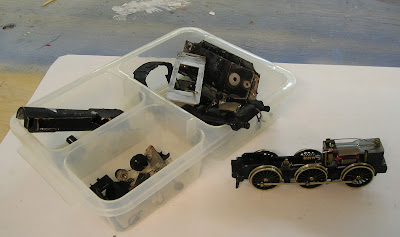 I will need to see which parts are usable and whether I need to rob parts from the Airfix body etc.